Showing posts from 2013
Show All

SOMETHING GOOD IS HAPPENING IN NIGERIA, AT THE LEAST IN THE STATES

- December 21, 2013
For over a week now, our airports and motor parks are overflowing with passengers. People are hustling and pushing to get a seat to travel out to the States to spend the Christmas and New Year holidays with their folks. A friend of mine was struggling to get a ticket to Calabar on his way to Calabar Carnival and then on to Obudu Cattle Ranch. If you live in Lagos you will have noticed that the traffic situation has gotten so terrible in the last two weeks and I am wondering what the matter is. During this week, I was in Abuja and I could not distinguish Abuja from Lagos when it came to traffic congestion. Where have all these cars come from? Are they owned by ghosts or aliens? Are the drivers on sightseeing? They must be pursuing economic activities and that can only happen where something is happening. But if you read the headlines in our Newspapers or some of the commentaries, you are encouraged to think that nothing is happening in Nigeria, except of course Poltics. Yes Politics,
Post a Comment
Read more
- December 17, 2013
NIGERIA'S 2014 ECONOMY: DEBOTTLING THE BOTTLENECKS Early in the week, the Minister of Finance and the Coordinating Minister for the Economy(CME), Dr. Ngozi Okonjo-Iweala held a top level interaction with the creme of the private Sector in Lagos midwifed by the Nigerian Economic Summit Group(NESG). She made a presentation about the performance of the Economy in 2013 so far and gave some insight into Government thinking for 2014. In my view I think that her presentation was balanced. The statistics which she reeled out, generally agreed with the report just released by the IMF following their recent article 4 review and consultations with the Government of Nigeria. The Economy has been growing in GDP at decent and competitive rate,in the 7% range, though below the the 9-11% recommended for Vision 2020. Inflation has decelerated to single digit( below 9%), which to me is a feat which needs to applauded, given where we were coming from in the last coupl
Post a Comment
Read more

- December 08, 2013
MANDELA NELSON MADIBA(1918-2013): A METAPHOR FOR TRUE LEADERSHIP The World has seen Men and Leaders but Nelson Mandela is a type. It is indeed true that some of the worst leaders the World has known come from Africa and generally when the World wants to give examples of bad political leadership, they go quickly to Africa. From the Mobutus to the the Idi Amins; from the Muamar Ghadafis to the Abachas, Africa is replete with poor leadership, especially in the political arena. But thank God that Africa, black Africa that is, has produced to my mind the greatest Leader of Modern History ( if you prefer one of the greatest, I hold no grudge). Nelson Mandela born 95 years ago on July 18, 1918, died this Thursday December 4, 2013 and the World lost a man, a leader in the truest sense. He was educated and comfortable, a lawyer, but chose to devote his life to fighting for freedom and went to jail for 27 years(1964-1990) to achieve his vision for his native South Africa. What was more,
Post a Comment
Read more
- December 06, 2013 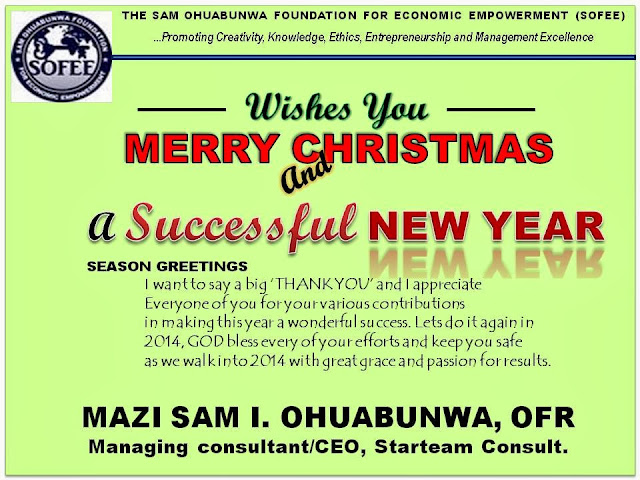 2014: THE GLOBAL REALITIES OF A PACIFIST AMERICA

- December 02, 2013
2014: THE GLOBAL REALITIES OF A PACIFIST AMERICA    There can be no denying the fact that President Obama is leading America away from war and cowboy combative stance to a more pacifist and diplomatic conduct of global affairs. President Obama rode on the back of battle-weary Americans to the White House. His predecessor had pursued Alqueda to Afghanistan and got embroiled in a physical combat they could never win, depending of course on the definition of victory in this matter. Is it when Alqueda surrenders or when their key leaders are killed or when the rebels are driven out of the critical Afghanistan territory. Looking for whom to hit as immediate retaliation of the humiliation of America by Alqueda terrorists who invaded the 'all powerful' America' on the 11th of September,2001,President Bush went after Saddam Hussein and Iraq. America visited its fury on Iraq as a 'wounded' lion. May be it would have been wise for America to have departed after the fall
Post a Comment
Read more
- November 25, 2013
NOW THAT THE GENCOS & DISCOS HAVE BEEN SOLD....is that the end of the story? We should be thankful to God that we have come this far in the Privitisation and deregulation of the Electricity Power Sector. It has been a very long and tortuous journey with so many twists and bends. From Electricity Corporation of Nigeria (ECN) to National Electric Power Authority ( NEPA) to Power Holding Company of Nigeria( PHCN). From a monolithic hegemony to an unbundled behemoth . From Gencos and Discos that were owned by the government to privately owned and managed Power generating and distribution companies. We have come a long way. We must congratulate the Government for staying the course and showing uncommon determination to see the programme through. Well you may say that they really had no other choice. Having tried everything and having invested( some Nigerians think wasted) billions of Naira and yet ended with only 4000 MW of electricity and epileptic supply to thoroughly dissatisfi
Post a Comment
Read more

NIGERIA AND LATE BUDGET APPROVALS: BACK TO SQUARE ZERO

- November 25, 2013
NIGERIA AND LATE BUDGET APPROVALS: BACK TO SQUARE ZERO We seem to be back at it again. One step forward, two steps backwards. Recent media reports about a brewing budget crisis between the Executive and the Legislature is discomforting and portends a real danger to the orderly development of our political economy. For many years, we have had disjointed budget implementation cycles that have left many questions than answers. National budgets are approved march or April, four months into the budget year and six months later, by November, further releases are stopped and unused funds returned to the treasury. How much of the Nation's budget can be executed in six months, not with with the delays due to civil service bureaucracy and the 'Undue Process' bottleneck. So year on year, we go through the rigours of a budgeting process and we derive sub optimal benefits because of delays at every stage. In the last two years, we have noticed some effort at changing this depressing
Post a Comment
Read more
- November 20, 2013
NIGERIA ,ARM-CHAIR CRITICS AND HYPOCRITES  Nigerians are very good in several things and we know it. Plenty of good and Plenty of Bad. Some people say more bad than good, but I stoutly insist that we do a whole lot of good, wonderful and noble things. Infact the World knows that we are a special breed and that we can accomplish several things if we put our minds to them though sometimes, it looks like they focus too much on our bad side, perhaps because, we unwittingly focus them there through our Public discourse. If the truth must be told, many Nigerians who TRULY Succeed in our Country in Business or their professions will be outstanding in other climes. Please mind my word. TRUE SUCCESS. I am not referring to the criminally minded. There is good success and there is bad success. Criminals and the short circuiters may achieve pyrrhic success by whatever means. But I do not think they will easily succeed in other climes. The bar to become a criminal and short
Post a Comment
Read more

IS NIGERIA 'BROKE', CASH-STRAPPED, INSOLVENT OR WHAT?

- November 11, 2013
In the last couple of weeks I have heard various complaints from different quarters which are troubling. The first shots came from the States. On more than two occasions, the State Commissioners of Finance came back from Abuja without Collecting money from the Federation account. The monthly FAAC meetings were aborted or abandoned. I understand that the commissioners were protesting that the Federal Government was owing them and that they were not putting all the money to be shared on the table. I have watched some Governors on the Television complaining bitterly.  Just as we thought that the matter was being resolved, we began to hear other stories, indicating that We are having challenges with funding our budget and meeting our cash commitments. And I am wondering what is the matter. As far as I know we have been selling our crude oil above the budgeted benchmark price per barrel.Certainly not less than 90 dollars per barrel. I am also not aware of any major disruptions to o
1 comment
Read more

HALTING THE UNWHOLESOME MIGRATION AND THE WANTON EMIGRATION

- November 04, 2013
HALTING THE UNWHOLESOME MIGRATION AND THE WANTON EMIGRATION Lagos is bursting on its seams and so is Abuja. Everyday lorry loads of human beings land on the outskirts of Lagos and Abuja. Men and women, mostly men; young and old, mostly young; educated and uneducated, mostly both. What are they looking for? Work! Means of livelihood. Or Safety as in the recent times. During the militancy they moved from South-South, during the kidnapping, they moved from the South-East and now in the reign of Boko haram,they are moving from the North East.Some come prepared but most unprepared, no relation and no friend. They land and just begin to 'hustle', some ending up on the streets, some into crime and then into the prisons. Indeed some end up as destitutes, lucky ones repatriated overnight in trailers to their States of Origin.    When you go to the Foreign Embassies in Lagos and in Abuja, you get the wrong impression that Nigeria is at war. People arrive at Embassies b
Post a Comment
Read more
More posts