Showing posts from August, 2015
Show All

THE PORTHARCOURT VOLUNTEER :LESSONS FROM THE NIGERIA CIVIL WAR

- August 24, 2015
I have often pondered if the Nigeria Civil war 1967-1970 was inevitable. Could we have done anything to prevent or avert it? Considering the colossal cost of that war in man and materials, arguments have continued to rage as to the inevitability of the war. It is estimated that up to 3 million people died during the war, most of whom were Biafrans and predominantly Igbo .From those killed in the January 15th 1966 coup,the July 1966 counter coup and its aftermath, to those killed in the progrom; from those killed in the battle fields to hapless civilians bombed and strafed in market places, from traumatized and dehumanized civilians murdered in cold blood as happened in Asaba to Children who died from malnutrition, the human cost was enormous. Not to talk of the loss of property by mostly Ndigbo all over Nigeria, some of which became classified as 'Abandoned Property'   When the war ended, all Biafrans who had accounts in the banks before the war were paid a maximum of F
1 comment
Read more

You all have waited for this, Now you have it! 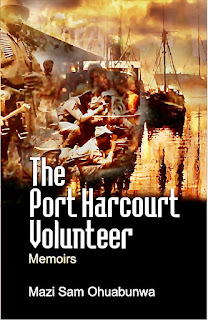 Mazi Sam  Ohuabunwa's two latest books are now available on e-copy. You can download them from any of these platforms; Amazon, Apple iBooks, Books on Board, Google, Kobo, Nook ... Books that will transform your thought pattern and shape our lives for the future..,
Post a Comment
Read more

- August 16, 2015
As has been long expected, the gale of sacks and replacements in the public sector organizations and institutions has finally arrived on shore . The boards of all government institutions, corporations and agencies have been dissolved over the media, no time for hand over, no time to say good bye. As it was in the beginning so it is now. As it happened in Obasanjo's time, so it in Buhari's time. The boards were not appointed to achieve anything except as compensation, so they could be dispensed with any how! Then the heads of Agencies are are being fired, one a day, and new ones are being hired almost instantaneously. As it is now, so it was not in the past. As it was in Jonathan's time, so it is not in Buhari's era. Way back, people were fired, then the positions left vacant or people were appointed to act and it took a long time to appoint substantive replacement. But today, people are sacked and are replaced immediately, no time for lobbying, no time to prevaricat
1 comment
Read more

THE CHALLENGE OF SUCCESSION PLANNING IN NIGERIA

- August 10, 2015
One of the practices that few companies in Nigeria (other than large corporates) think about is succession planning. Succession planning is the management of your future talent in your company, grooming individuals to take on bigger, more important roles and thinking about the continuity of the company. There is little evidence to show that even leading Nigerian indigenous organizations undertake succession planning. It is even worse with family businesses or sole proprietors.  Research has shown that many of the world renowned businesses and corporations with the most longevity have their successes rooted in effective succession planning. More often than not, most of the founders and CEOs of these great companies begin planning their exit strategies right at the start of their appointment. Unfortunately, in the case of Nigerian owned companies, many of the founders have difficult time planning their exit or succession. Why? They do not want to give up power to another person or
Post a Comment
Read more