Showing posts from 2016
Show All

- December 19, 2016
There is an Igbo proverb that says: "Onye nnaya duru ohi, na eji ukwu agbawa uzo",translated to mean that a son whom the father sends to go and steal, uses his legs to break down the door. He goes in full confidence, without a care trusting that if anybody challenges him, his father will be handy to extricate him. This is exactly what played out in Rivers State at the recent  second rerun of legislative elections. The first rerun ended in-conclusive because of alleged violence inspired by desperate politicians who insisted that they must win Rivers State.    Largely because of fear of violence or so as they claimed, INEC delayed the second rerun and perhaps was considering leaving it completely till 2019 until the Senate issued an ultimatum forcing them to announce a date for the second re-run. In the view of some political grandmasters of Rivers State, they would feel better and much more relevant, if Rivers State had no representatives in the National Assembly than ha
Post a Comment
Read more
- December 13, 2016
OPPOSITION PARTIES LEAD WEST AFRICA'S NEW POLITICAL EVOLUTION   It was the President of Sierraleone who said a few years ago that" if Nigeria sneezes, the rest of West Africa catches cold". That statement only confirmed what has long been known that it is Nigeria that is keeping West Africa down. Any day Nigeria decides to rise, West Africa will automatically rise with it. Indeed it is Nigeria that is delaying the rise of Africa itself. South Africa, Egypt, Kenya and Nigeria determine the fate of Africa. South Africa is doing ok, Kenya is doing great, Egypt is flagging and Nigeria is gasping. While this may be disputed by some, everyone agrees that the fate of West Africa is in Nigeria's hand- for good and for bad.   So during the 2015 elections an opposition party-an alliance between Tinubu's ACN and Buhari's CPC glued together by the new PDP swept the Nigerian elections to cruise to victory, beating an incumbent President and displacing a ruling party,
Post a Comment
Read more

- December 07, 2016
Very often, we say that the way to solve our economic problem is to diversify our economy. But the truth is that Nigeria's economy is fairly diversified right now. Current GDP figures give credence. As at half year for example, non-oil was contributing about 90% of our GDP, leaving the 'almighty Oil & Gas' with only a paltry 10%.    The key contributors to our GDP were Agriculture( 19.7%), Trade-wholesale & Retail ( 21.55%), Manufacturing(9.93%)-close to oil & Gas;Construction( 3.99%),Real Estate( 6.46%); other services including Telecommunications and financial services( 4.08%)   Today, the structure of our economy gives an impression of a sophisticated economy where Services contribute more to the Economy than Industry  (  50%vs 21%)   The tragedy of our economy today is that oil & Gas which contributes only 10% to GDP is the one we depend upon for about 90% of our Foreign exchange. Which is to say that the non- oil sector which contribut
Post a Comment
Read more

THE BLOOD OF THE INNOCENT CRIES FOR JUSTICE IN NIGERIA

- November 28, 2016
Often, many people have wondered what is the cause of the trouble with Nigeria. And many have come up with several reasons why we are where we are. Why we seem to move one step forward and two steps backwards. Why a country with so much wealth and talent will house one of the greatest numbers of poor people in Nigeria. Why a country born with so much hope in 1960 is unable to achieve adulthood in 2016. Last week on this page I had indicated that about 50% of Nigerians are classified as miserable by the World and 68% are regarded as operating below the poverty line. The distinguished Chinua  Achebe wrote a book with the title: "The trouble with Nigeria " where he also identified many of the issues but concluded that the central problem with Nigeria is poor leadership. Professor Chinua Achebe was right that Nigeria's critical challenge is leadership. So also are the other Nigerians who have proffered other reasons why things are not working the way they should in Nigeria.
Post a Comment
Read more

THE DILEMMA OF THE TRILEMMA: GROWING BASKET OF THE MISERABLE

- November 21, 2016
Last week the National Bureau of Statistics( NBS) released the bad news that headline inflation has hit 18.3% and has thus doubled in under one year, since we closed 2015 at about 9.5%. In some climes a 100% growth in inflation could cause riots. At the same time, the Naira exchange rate has depreciated by nearly 60% in the official market while it has more than doubled in the parallel market. Interest rates which came down, close to single digit at the end of 2015 has remained high and growing. Since July the Monetary Policy rate ( MPR )has been at 14%, though actual bank interest rate is about 25%. Similarly, unemployment has continued to rise from quarter to quarter. Gross unemployment which came low to about 6.4% in Q1 of 2015 has exceeded 15% by Q3 this year. When added to Underemployment it reaches 31%. In the youth population this comes to over 42%. This Trilemma of rising inflation, rising exchange rate and rising interest rate has created a dilemma for the government. Super
Post a Comment
Read more

THE PHENOMENAL TRIUMPH OF TRUMP: LESSONS FOR THE WORLD

- November 17, 2016
Last Tuesday, Donald Trump defied most political pundits, most pollsters and stunned the World with a largely unpredicted landslide victory over Hilary Clinton and the Democratic Party . Many reasons are being adduced for this phenomenon, none of which can successfully explain why a man who came from outside, never gone through an election before, never held a public or political office of any kind and who broke all the rules of political competition and engagement, became the President of the World's largest democracy and economy at the first shot. I believe that the best we can make from this historic outcome at this time is to make some common-sense deductions and learn a few lessons.  1. BYE TO POLITICAL CORRECTNESS  Mr Trump seemed to have rewritten the rules for political competition. Standard wisdom all these years suggested that there were several things one must not say, several positions one must not take openly if one wanted to win elections. Mr Trump said all t
Post a Comment
Read more

TODAY,WE ARE ALL AMERICANS

- November 07, 2016
Chido Onumah recently published a new book titled: " We are all Biafrans". In the book, he seemed to be talking of the Biafran spirit- the Igbo spirit of enterprise, creativity, hardwork and excellence that yearns for Justice, Equity and fair play for all. In essence he believes that many People in Nigeria and may be elsewhere share similar sentiments, which is why many objective commentators classify the current Biafran agitation as a cry for Justice for Ndigbo.It is therefore reasonable to suggest that a way to deal with this agitation is to give Justice to Ndigbo, just as other people all over the World who feel discriminated against, marginalized or oppressed deserve to get justice. That therefore gives the Biafran agitation a global attraction.   Today, November 8, 2016, Americans go to the pools to elect the 35th President of the United States of America. And today we are all Americans, even if we will not all vote. This is because the American election has a globa
Post a Comment
Read more

- November 04, 2016
To be sincere, I am truly excited with the way the war against corruption is gathering steam. My prayer is that PMB would not allow the momentum to decline. Up till two weeks ago, the focus seemed to have been on the past government. Then enter the Judiciary and the pandora box seemed to have been opened. Justice ADEMOLA blamed his problems on the Attorney General of the federation, Mr Malami. He had ordered the arrest of Malami for professional misconduct when he was in Kano. Though he eventually discharged Malami because of the intervention of the NBA, he was sure, the senior advocate of Nigeria, now AGF had been looking for an opportunity to take his pound of flesh.  Justice John Inyang Okoro said Minister Amaechi is behind his own problems. Amaechi asked him to influence the governorship election Supreme Court appeal judgements on Akwa Ibom, Rivers and Abia States. Amaechi insisted he was conveying the wishes of PMB and his party APC. Before that, the APC governorship candidate i
Post a Comment
Read more

CHANGE BEGINS WITH ME CAMPAIGN : IMPERATIVES FOR SUCCESS

- September 12, 2016
Last Thursday, President Muhammadu Buhari( PMB)launched the new National Orientation campaign called: Change Begins with me. That same day, INEC was ' compelled ' to postpone the Edo gubernatorial election. In his address at the launch, PMB said " We must resist the temptation to fall on the same partisanship, pettiness and immaturity that have poisoned our Country for so long" I believe that postponing election for partisan reasons is one of those things that PMB was preaching about. Interfering with the independence of INEC,CBN and such other regulatory agencies is part of our 'poisoned' past. I am one of those who have called for a national reorientation and the broadening and deepening of the fight against corruption. I had fully agreed with former UK Prime Minister David Cameron that Nigeria was fantastically corrupt and opined that merely focusing on the alleged corrupt election funding of the former ruling party was only scratching the surface. So I
Post a Comment
Read more

WAY OUT OF RECESSION: COURT INVESTMENT AS IF OUR LIVES DEPEND ON IT.

- September 05, 2016
Last week, the cat was let out of the bag, the woman who had been hiding her pregnancy was delivered of a baby in a market square, leaving nothing to imagination. From a technical recession we emerged into a real, true and official recession. From a -0.36% contraction of GDP in Q1, we landed to a -2.06% contraction in Q2. Thank God for democratic governance and more for the integrity of President Muhammadu Buhari, and the professionalism of the NBS management,may be, the figures will have been dressed up, which was the fear of some people as it seemed to have taken the National Bureau for statistics( NBS), much longer time than usual to release the Q2 report. It was the 'jazzing' up of economic data that has led to the impeachment of the Brazilian President last week . Last week, before the official confirmation of the recession, I had advised on this column that we needed a single minded focus on Agriculture and Manufacturing as a means of working ourselves out of the reces
Post a Comment
Read more
- August 31, 2016 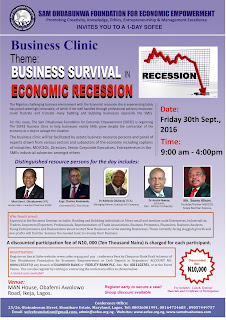 ... In an Economic recession,  it takes knowledge to survive. The Sam Ohuabunwa Foundation is bringing to you Experts to help businesses survive in this period. Find fliers for more details...
Post a Comment
Read more

WAY OUT OF RECESSION: KEEP THE FOCUS ON AGRICULTURE & MANUFACTURING

- August 29, 2016
That our economy is in recession has been established and the symptoms are crystal clear. I identified some of them last week. The question I believe that the government and the people of Nigeria must be asking is how do we recover from recession and restore growth to our economy?First, I believe that the bullish and reflationary 2016 budget( though some disagree that it is reflationary) was crafted with this in mind. The government clearly saw the direction the economy was going and decided to borrow to spend our way out of recession. With further decline in revenue the borrowing may be more than projected 2.2Trillion Naira if the budgeted goals must be achieved. But there are a couple of challenges. Are we actually able to find lenders within the time frame of Budget 2016?. How soon will the spending be done and how quickly will the impact be felt? . The rumored 'emergency powers' being sought by President Muhammadu Buhari must be directed to this end. If this is only to sh
Post a Comment
Read more
More posts