Showing posts from February, 2016
Show All

THAT CALL FOR EMERGENCY ECONOMIC SUMMIT

- February 24, 2016
Late last year I made a call asking that we should declare a state of emergency on our economy. As I watched the oil prices plummet without restrain, as I watched our income drop with with such rapidity, as I watched our Naira depreciate against the dollar and other foreign currencies at rates never seen before and as I watched President Muhammadu Buhari( PMB) take unusually long time in assembling his economic team, I went into panic.    I was troubled, that right in our faces, our economy was unravelling and the response by the only government institution that was working at the time- the CBN, though apparently sensible, only seemed to complicate the situation. The ban on 41 products from accessing Forex from Government funded Forex market made sense. If you did not have enough money to pay for all your needs, you would naturally prioritize and decide to go without some. If that caused you to have gastric ulcer or made you sweat profusely in the heat, that will be the conse
Post a Comment
Read more

THE WORSENING UNEMPLOYMENT CRISIS AND OTHER PRESSURE POINTS

- February 17, 2016
In the last six months or so, I have been under some intense pressure from two angles. Those looking for Jobs and those asking for financial help-outright dash or soft loans to pay Children's school fees or to pay for Accomodation . It is not as if any of this is new. In my days as CEO of Pfizer/ Neimeth, I was practically a one-man employment bureau. The biggest file in my office with several volumes bore the title: JOB SEEKERS. And if I went to church or travelled home with any amount of cash, I mean any amount, I never came back with any. And that was why I was one of the early supporters of CBN Governor Sanusi Lamido Sanusi's 'Cashless Lagos' campaign which later metamorphosed into ' Cashless Nigeria'.  But as I have found out, that did not help matters for long. The arrival of Mobile banks in mobile phones has worsened the situation. The excuse that I have run out of cash( which most solicitors never believed), or that the banks have closed or that
1 comment
Read more

- February 08, 2016
A couple of weeks ago following the worrisome sack of many PDP governors and Legislators by the Court of Appeal, I wrote an article " The Judicial decimation of PDP & Its Implications". Among other things, I drew the attention of Nigerians to the dangers of a one- party state. With the way things were going, it looked like most of the subdued electoral victories of the PDP in the States and in the legislature were being reversed. The matter disturbed all fair minded Nigerians. Even the Chief Justice of Nigeria noted the glaring inconsistency in the judicial declarations of the Justices of the Appeal Court. But in the last week or so, the tide seemed to have changed and the Supreme Court weighed in strongly on the side of PDP. This piece is therefore to bring a balance to the earlier one that spoke of Judicial decimation, because what has happened in the last couple of days is judicial resuscitation.   The Supreme Court confirmed the elections of Governors Ayade o
1 comment
Read more
- February 08, 2016 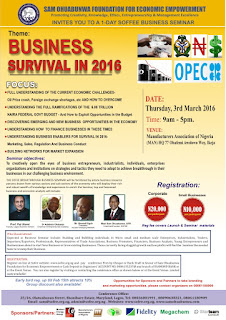 ... Business Survival in a harsh economic terrain.. You need some wise strategies and ideas to overcome... Be at this BUSINESS SURVIVAL SEMINAR 2016,  Don't be left out...
Post a Comment
Read more

WITH LESSONS FROM SINGAPORE

- February 08, 2016
I have been in Singapore in the last week attending the Global Leadership Prayer Summit organized by the Full Gospel Global Forum and hosted by the FGB Gatekeepers Singapore, where among other things we have been praying for our Nations. In between our sessions, I have found time to move around Singapore and I have been awe stricken by the simple sophistication and splendor of a Country that got its Independence in 1965( 5years after Nigeria) and that was a third world country like Nigeria in the 70s, now a thoroughly advanced Nation in the First World, in the same league as The USA, Uk, Germany and France. The transformation is mind boggling.   Singapore is one of the four Asian Tigers- Hong Kong, South Korea , Taiwan and Singapore that transformed within three decades of purposeful leadership anchored on sound economic policies and a Spartan work ethic to achieve consistent high growth rates, high income levels and high quality of life. Today Singapore is a global industrial
Post a Comment
Read more
More posts