Showing posts from August, 2014
Show All

MENINGITIS, EBOLA VIRUS,EXPERIMENTAL DRUGS AND THE REPEAT OF HISTORY

- August 12, 2014
A few days ago, faced with a rapidly advancing invasion of Ebola epidemic into our territory, the Nigerian Government authorities sent a request to the United States Centre for Diseases Control ( CDC) to send us some of the experimental drug that is claimed to be helpful in managing this 'latest' disease that the world has seen. Though the disease has been known in Africa for the last several years, it had not attracted serious international attention until this year. So far, the drug Zmapp has only been given to two human beings- American health workers who caught the Ebola virus while treating patients afflicted with the disease in Sierra leone. Until a week or so ago, the drug had only been tested in monkeys and had neither been approved for human subject trials nor for marketing until these Americans- good Samaritans fell sick and in the absence of any other viable alternative, in the face of imminent death, the victims agreed to try the "untested" drugs
Post a Comment
Read more
- August 04, 2014 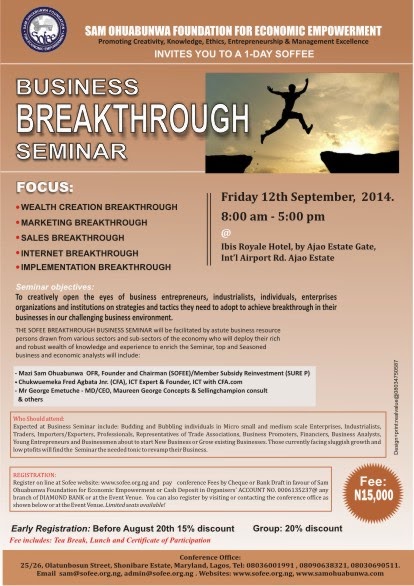 - August 01, 2014
There is a popular saying that what goes up must come down. Another says that what a man sows he will reap. And another, says what you gain in the straight you lose in the bend. And yet another says that if you defecate on the road on your way to the market,on your way back you will be greeted by flies. Unfortunately, many of our Political Leaders seem not to learn anything from these age long lessons from the sage. And that's why, rather than accept the consequences of their indiscretion, they are either startled by them or look for some one else to blame. A couple of months ago as I was incensed by the gale of defections mainly from the PDP to the APC. In one fell swoop, five PDP governors defected to APC, followed by hordes of members of the House of Representatives whose Speaker cheerfully announced the defections on the floor of the house apparently completing the 'simple' process of changing parties in the National Assembly. In a blink of an eye, the APC became th
Post a Comment
Read more

INCESSANT STRIKES AND DISRUPTIONS OF THE ECONOMY: TIME TO HALT THIS GROWING MALADY

- August 01, 2014
For more than six months, the Association of Senior Staff Union of Universities infamously called ASUU embarked on a needless strike that lasted longer than its usual biennial rumpus. Nearly an entire academic session was wasted. I severely criticized the wanton economic waste and disruption of academic calendar of Nigerian students. I argued that ASUU had misused the instrument of Strikes to the point that it had become counterproductive, even for them. I thought that it had become infradig and demeaning for academicians to use the same method over many years to solve the same problem and still hoped for different outcomes. My take was that ASUU has perpetually used the instrument of strikes as a blackmail weapon to force their employers to "agree" to what they neither have the resources nor the willingness to implement . The Federal Government would 'agree' just to get the pressure off their backs and avoid political backlash and in the process buy some time. A yea
Post a Comment
Read more
More posts